At the behest of my good friend at TakingJoyBlog, Tot and I have been reading through some of the classic literature recommended by Ambleside Online. Of all the poems in Robert Louis Stevenson’s Child’s Garden of Verses, Tot responded to “Fairy Bread” the most. As I was reading it for the bajillionth time, I thought, “We should make some Fairy Bread. I wonder what that would be…maybe toast with sprinkles.”

I decided to do a quick search and see if anyone had already made some Fairy Bread. I’m not a cook, no sense reinventing the wheel. If someone out there had a better idea than toast with sprinkles, I wanted to see it. That’s when, to my delight, I discovered that Fairy Bread is a thing. In fact, it’s a delicacy in Australia. And, it’s bread with sprinkles!

Not only had my recipe idea been validated, but, more importantly, I had stumbled on an opportunity to throw a geography lesson in with our literature and cooking activity. It was homeschool serendipity. Nothing makes me happier than combining multiple subjects into one cohesive lesson.

First, I grabbed my globe. I showed Tot where Australia was located and how far it was from the United States. Then I discussed that Australians speak English like us, but some of their words are different. A sweater is called a jumper. Sprinkles are called 100s and 1000s. Male kangaroos are nicknamed boomers. Finally, I explained the differences in weather.

At last, it was time to make our treat. I informed Tot that Australians make fairy bread for special occasions like birthdays. The recipe is rather simple, but this is the most amusing and descriptive one I found: “How to Make Australian Fairy Bread“

We used wheat bread because that’s what I had on hand. Tot loved it and wants to make it again soon. I enjoyed it, but two triangles was enough–all the margarine and sprinkles were a cavity-inducing level of sweetness. 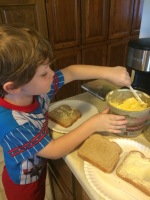 To read Stevenson’s “Fairy Bread,” go to this link.

To reinforce the geography,  download these coloring sheets and peruse this simple virtual tour of Australia.