In the last post, I mentioned the button activity went so well the angels wept. They wept with this one too, but for entirely different reasons. I tried this activity the same week we played with the buttons, and I’m posting it in the same week to make an important homeschooling point–it’s all trial and error. For every lesson that works, there will be one that fails miserably, especially in the early years.

I pulled out pom-poms of various colors and sizes with the intent of furthering the concept of big and little, strengthening fine motor skills, and reviewing colors. For colors, I tried having him sort the poms into yogurt cups. Tot just crammed them in without a care for sorting by hue. Actually, he didn’t care that much for putting the poms into containers either. He just wanted to rub the soft balls all over his face. He enjoys textures, so I guess I shouldn’t have been surprised. 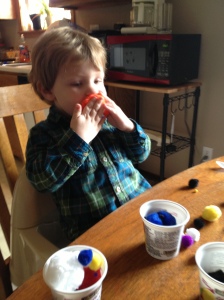 Tot was so focused on experiencing the soft material that I couldn’t get him to look at the poms long enough for him to determine which were big and which were little. After that, I introduced him to a pair of tweezers that came to a slight point. Working the tweezers, Tot would employ his fine motor skills. After a couple fruitless attempts to pinch the poms, he found it was much easier to stab them. Because of the slight point, the tool made a great spear. He would pierce the poms, and then shake them off into the container. Eventually, he learned to use the tweezers properly, but on his sock not the carefully selected material for this lesson.

Had I attempted this when Teen was little, I would have forced him to follow the lesson plan. I would have made sure that he did what he was supposed to do, dadgum it! The whole event would have been marked by frustration, strife, and a few tears from both of us.

Thankfully, age and experience have changed my perspective. I’m more flexible. “You want to rub pom poms on your face? Sure go ahead.” Being flexible allows room for your child to be creative, be innovative, and experiment. Tot did finally learn to use the tweezers properly, just not in the way I had imagined.

Most importantly, I’ve learned that one bad lesson doesn’t make me a bad teacher. Lessons go wrong, a curriculum I thought was awesome may not connect with my kid, and some days there are tears, but its all a grand learning adventure. I learn about my children just as they learn about their ABCs. I’ve always known that Tot is an explorer; I just hadn’t made that connection in his learning style. Now I know that when I give him something new, he needs time to examine it and experiment, and I shouldn’t even try directed activities with said new thing until he’s had time for that.

My favorite line from Meet the Robinsons is “From failure we learn, from success not so much.” That pretty much sums up parenting and homeschooling. The sooner you realize that; the more peaceful your homeschooling experience will be.