Fear had stopped my mind in its tracks. My brain could no longer fully function. Long memorized words sat frozen, and the only thoughts I had were of doom. My car had slowed to twenty-five miles an hour, and it took all I had to keep pressing the gas pedal. As much as I wanted to stop my vehicle, I couldn’t because we were at the pinnacle of a bridge, more than 175 feet in the air. Stopping there, without a shoulder and with cars whizzing past, would be very dangerous for my children, the drivers around me, and myself. Tears brimmed over my lower lids as the rain splashed outside. Streetlights overhead shone through the storm, casting a weird, sepia glow. I clung to the steering wheel, straining the muscles in my hands and arms. Whoosh, thump beat the windshield wipers in a steady rhythm, ticking off each second since we had left the safety of the ground. I wasn’t sure I could drive one more foot.

How did I get to that place of paralyzing fear? A little background. Obviously, I have issues with anxiety. I don’t go up. I don’t go through tiny spaces. I’m not crazy about being in a car when someone else is driving. And don’t get me started on those eight-legged spawns of hell. Through much prayer over the years, God has helped me get a handle on these issues. Most days my fears are quiet mewling kittens, easily ignored. But other times, when all my triggers are primed, my anxieties are roaring lions drowning out all rational thought.

That night on the bridge all my triggers had been primed. I was overtired from the sixteen hour journey from Missouri to Florida. My father’s recent serious health scare had me stressed out. Driving through jam-packed multi-lane rush hour traffic had amped up said stress and provoked my claustrophobia. Plus I already mentioned the rain, a nice wet topping on my anxiety sandwich. I was a jangle of overactive nerves long before I arrived at the bridge–a cable bridge, which combines my fear of falling with my fear of tight spots.

Due to the aforementioned circumstances, I had missed my exit. I mentioned this to Teen.

“Do we need to turn around?” he asked.

“Nah, it’s a circle. We can to Grandma’s and Grandpa’s this way too.”

But as I mentally mapped the new route, I realized we’d have to cross The Bridge.

“Oh no,” I said. “This way crosses the Dames Point Bridge.”

Teen, who is familiar with my issues, said, “We should turn around.”

“No. I’m not a coward,” I added more glibly than I actually felt. My heart had already started beating faster. Without thought I started tapping the steering wheel, a sure sign of stress.

You can handle this, I told myself and started measuring my breathing. The active control of inhalation and exhalation usually calms me. But the specter of the bridge loomed in my mind. The Dames Point stretches more than ten thousand feet over the St. John’s River. It’s clearance is 174 feet, more than a seventeen story building. Here’s a picture of a full-size cruise ship passing under its peak. 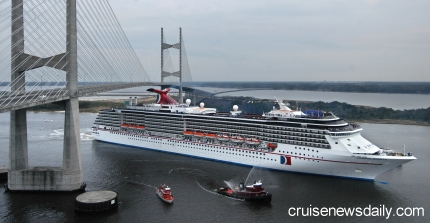 As the last exit approached, I considered turning around. That’s ridiculous. You would be so late getting to Mom’s and Dad’s. You can do this. But already the roots of fear had grown from my mind to my limbs. I took a deep breath, forcing air into my lungs, and peeled my fingers from the wheel. I exhaled and loosely curled them back into place. When I reached the base of the bridge, I fought the urge to slam on the brakes and knock the car into reverse. Truly, the only thing that stopped me was the knowledge of how dangerous such a move would be.

Tot’s been memorizing verses, and so far that summer he’d learned five. He joyfully joined me in reciting them one by one. Slowly, I climbed. My speed was about forty, but we were making forward progress. I was doing it!

After we’d finished Tot’s verses, I launched into my summer verses. Part of my brain was engaged in quoting scripture, but the rest was very, very aware of how high we were and how very, very long a drop to the water would be and how very, very many cars crowded past me. I tried regulating my breathing and focusing on the words; we inched upwards.

“Romans 12:2,” I uttered and faltered. I couldn’t remember a single word of that verse. I mentally grasped for syllables I could cling to, but there was nothing. That verse and all other active knowledge I had was gone. I sat shaking, terrified, aware of the danger of stopping the car, but unable to avoid that inevitable outcome. Images of my children and I trapped up there, waiting for rescue filled my mind.

“Let’s try one of yours, Mommy,” Tot said from the backseat.

“Mommy’s trying, Honey, but I don’t remember it,” I choked back tears, trying to protect him from my fear. He kept talking, but in my state I didn’t register his words. In my mind, the bridge rocketed skyward. My breathing stopped, and I felt my foot ease up on the accelerator.

Then Tot’s voice punctured through my frenzied thoughts, “…become a new person.”

I realized he was quoting one of my verses. My brain jump-started, and the rest of the verse tumbled out. “The old life is gone; a new life has begun! Second Corinthians 5:17,” we finished in unison.

“Thank you, Tot. You did such a good job.” The car had crested the hill, and we headed down. I was still afraid, but the utter terror had passed.

“Yes, Honey. I really do.” So he and I recited 2 Corinthians 5:17 all the way down the Dames Point Bridge. I was certainly frazzled when we finally reached my parent’s house, but we’d made it.

I’d love to say that experience on the bridge cured me. That I am now free of anxiety, but that’s not the case. God may never heal me of my fears. I don’t mind though because I know that He will guide me through whatever trials may come. “Each time He said, “My grace is all you need. My power works best in weakness.”  So now I am glad to boast of my weaknesses, so that the power of Christ can work through me.” 2 Corinthians 12:9 NLT

Find out about Teen’s memory app at http://www.memlok.com.